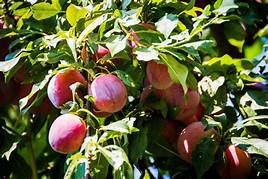 Written by CHRIS DEZIEL and published on https://www.hunker.com/

Plum trees are deciduous, flowering trees. They can be grown in soil of average fertility and moisture levels. Plant them in a spot that drains well and is in full sun. Plum trees need to be pruned once a year so that they’ll retain a healthy shape and produce abundant fruit. The timing is important, since pruning at the wrong time of year can expose the tree to disease.

How to Prune a Plum Tree

Pruning a plum tree can serve two purposes, depending on which time of year you do it. When you prune in the winter, you revitalize the tree and stimulate growth the following spring, whereas when you do it in the summer, you slow unruly growth and limit the size of the tree. The main purpose of pruning is to keep the tree healthy and maximize fruit yield, but the purpose can also be decorative, aimed at making the overall tree attractive in the landscape. In this regard, pruning is similar to trimming, although the two techniques aren’t exactly the same.

Proper pruning improves the quality of fruit that a plum tree bears.

A tree that has had regularly pruning from the time it was first transplanted will be a balanced specimen in which air can circulate freely through its branches. Because the fruit has plenty of room to grow and get lots of sunlight, it is bigger, healthier and tastier than the fruit that grows on an untrained tree. In addition, the fruit is easier to reach on a tree that has had regular pruning, because the height has been limited and there are fewer cross branches in the way.

Pruning a mature tree that hasn’t had regular care can be a daunting task. You may have to remove a number of fairly large branches to improve airflow and modify the shape of the tree. Whether you’re pruning a young tree or a mature one, it’s important to use clean tools and to make clean cuts to avoid exposing the tree to fungal diseases and harmful microorganisms.

Pruning techniques change slightly as a tree goes from a young, newly planted specimen, to a mature, fruit-bearing tree, to an established landscape tree.

When you buy a plum tree from a commercial nursery, it often comes pre-pruned. If not, you should plan on pruning it back during the first dormant season—late winter in most of the United States. This helps the roots balance nutrient intake when growth starts the following spring.

The first pruning is somewhat radical. Choose one branch to keep and cut off the others, leaving a short collar on the stem. Finally, cut back the main branch so that it’s only about 30 inches long. Be sure the cuts are clean and smooth, and use latex to seal the cuts to prevent infection to the tree. Do not prune the sapling during the summer.

During the next dormant season, choose four branches evenly spaced around the main trunk to keep and cut off the rest. This ensures the tree will have a balanced shape as it grows. Cut back the four keeper branches, leaving only one or two buds on each of them, and cut off about a foot from the top of the tree, just above a bud. Besides limiting the height of the tree, this forces the roots to send nutrients into the keeper branches and makes for a bushier tree. Avoid pruning during the second summer.

In the third dormant season, the tree will have grown several more lateral shoots. Choose four or more of these evenly spaced around the trunk as keepers—along with the four original ones—and cut off the rest. Cut another foot from the top of the trunk. Repeat this pattern for one or two more years until the tree reaches its optimal height for fruit production and retrieval.

Pruning a Plum Tree Once It Matures

When a plum tree matures, it’s best to do all the pruning in the summer.

Once a plum tree matures, and as long as it remains healthy, it doesn’t need revitalization, and since winter pruning increases the risk of infection by silver leaf, it’s better to avoid it. Summer pruning, on the other hand, now helps maintain the shape and health of the tree. Complete all summer pruning by mid- to late-July to prevent frost damage to the tree.

A mature plum tree that is kept properly pruned can be a valuable landscape specimen, even without fruit.

It isn’t unusual for a plum tree to come to full maturity without any pruning at all. Such a tree is bound to be unbalanced, with misshapen or dead branches, and undersized, hard-to-reach fruit. Summer pruning can correct the faults, but you may have to spread it out over two or three seasons to avoid stressing the tree to the point of damage.

You’ll need a stable ladder to reach the top branches, a sharp pair of secateurs and a pruning saw, because some of the branches you need to remove are likely to have diameters in excess of 2 inches. It’s also a good idea to have paint on hand for sealing the cuts to prevent infections. You can buy this paint at a garden center or you can make your own. You should also have a plan for disposing of the branches you cut. You may end up with a good number of fairly large ones.