The Right Way To Trim A Tree 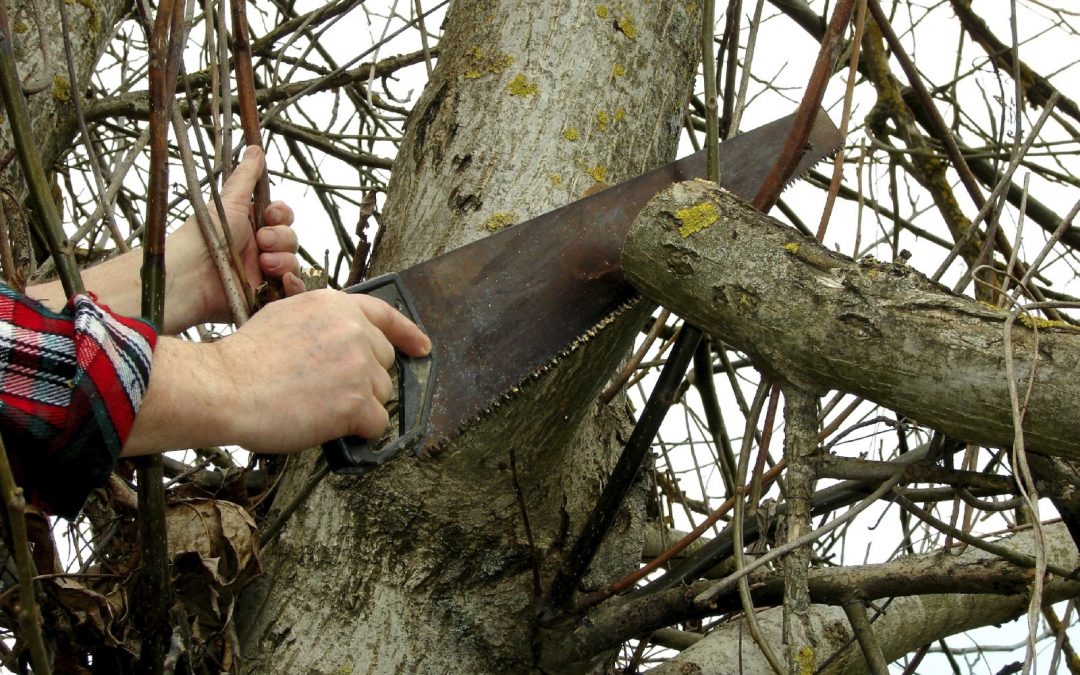 Written by Valerie A. and published on https://www.lowes.com/.

As leaves fall from the trees each autumn, branches formerly covered in a canopy of dense foliage come out of hiding. Although many gardeners would rather never deal with the falling mess of leaves, I relish this time as an opportunity to inspect each tree canopy. It’s now that I carefully make note of any branches I may need to remove from my trees. Taking advantage of these dormant months gives me time to develop a plan for pruning and trimming trees in my landscaping.

How to Prune Trees and Shrubs

Maintain safety: Remove low-growing branches if they impede passing vehicles or obscure oncoming traffic from view. You may also need to take out split or broken branches before they have the chance to come crashing down on a person, car, or building. It’s wise, too, to prune out low-hanging, whip-like branches (especially those with thorns) that may strike passersby.

Alter or rejuvenate growth: Neglected, overgrown shrubs can sometimes be turned into small multi-trunked trees if you remove their lower limbs; this may be a better approach than digging out the shrub and planting another in its place.

Direct growth: Pruning influences the direction in which a plant grows: Each time you make a cut, you stop growth in one direction and encourage it in another. This principle is important to keep in mind when you train young trees to develop a strong branching structure.

Promote plant health: Trees and shrubs stay healthier if you remove branches that are diseased, dead, pest-ridden, or rubbing together.

Create particular shapes: You can prune a line of closely planted trees or shrubs as a unit to create a hedge. If you’re a hobbyist who practices topiary, you can prune trees and shrubs into fanciful shapes.

Produce more flowers or fruits: Flowering plants and some fruit trees are pruned to increase the yield of blossoms and fruit and to improve their quality. You’ll need, for example, to remove spent flowers from roses throughout their bloom time. For some fruit trees, you’ll make many small, precise cuts each dormant season. Although this sort of pruning sometimes ranks as a tedious chore, remember that your efforts will pay off in lavish bloom and generous crops of fruit at harvest time.

Pruning at the wrong time won’t damage plants, but it can sacrifice that year’s flowers or fruit. As a rule of thumb, prune spring-flowering shrubs and trees immediately after the flowers fade. Prune summer-blooming trees and shrubs in winter or early spring, before new growth emerges. In regions that have harsh winters, late summer pruning encourages new growth that might not harden before the cold settles in.

Note that these guidelines are most pertinent to climates with four distinct seasons and definite winter chill. In warmer-winter areas, timing will vary depending on the particular plant’s native climate. If you have any doubts about the best time to prune a particular plant, ask your Lowe’s nursery personnel or your cooperative extension office for advice.

Many plants, especially deciduous trees and shrubs, are best pruned in late winter or early spring, just before they break dormancy. Heavy frosts have abated, so the plants are less likely to suffer cold damage at the point where you make your cuts. Deciduous plants are still bare, so you can easily spot broken and awkwardly growing branches and decide how to direct growth. And because growth will soon start, your pruning cuts will stimulate new growth in the direction you want.

For flowering trees and shrubs, you’ll need to know whether the flowers are produced on old or new growth. If early spring flowers come on last year’s wood – as in the case of forsythia, flowering quince, and flowering trees, such as peach and plum – you’ll lose many flowers by pruning before plants break dormancy. It’s best to wait until the flowering has finished before pruning. But plants such as cinquefoil, which bear flowers on leafy new growth formed in spring, can safely be pruned while dormant.

When removing heavy branches, avoid ripping the bark by shortening the branch to a stub before cutting it off at the branch collar. Use a sharp pruning saw and make these three cuts as described below:

About a foot from the branch collar, make a cut from the underside approximately a third of the way through.

About an inch further out on the branch, cut through the top until the branch rips off. The branch should split cleanly between the two cuts.

A second time to prune is in late summer. Some gardeners like to thin plants in summer, because it’s easier to see how much thinning is really needed when branches are still thickly foliaged. And because growth is slower at this time of year, pruning is less likely to stimulate new growth–an advantage when you’re thinning. In cold-winter regions, don’t do summer pruning later than one month before the first frost; if you do, an early frost may damage the plant at the point of the cuts.

Although evergreen trees and shrubs don’t drop their leaves, they approach a near-dormant state during the winter months. The group includes broadleaf evergreens (such as boxwood and camellia) and conifers, among them spruce and pine. Broad-leaved evergreens are usually best pruned in late dormancy or in summer, as outlined above. For flowering broad-leaved evergreens, however, timing is a bit more precise; you’ll need to prune with an eye toward preserving flower buds. Prune after bloom for evergreens flowering on last season’s growth; prune before spring growth begins for those that bloom on new growth.

Most conifers are pruned only in their first two or three years in order to direct their basic shape; from then on, they’re best left alone. Some of the most badly botched pruning you’ll see is on conifers that have been pruned too severely, usually to keep them confined to a too-small location – although a few conifers, including arborvitae, yew and hemlock, lend themselves to shearing into hedges.

Pruning makes sense when you understand the role and locations of growth buds. Select the bud you want to keep and cut just beyond it. The resulting growth will vary depending on the bud. If your pruning is to have the effect you want, you’ll need to learn to recognize three different kinds of growth buds.

A terminal bud grows at the tip of a shoot and causes the shoot to grow longer. These buds produce hormones that move downward along the shoot, inhibiting the growth of other buds on that shoot.

Lateral buds grow along the sides of a shoot and give rise to the sideways growth that makes a plant bushy. These buds stay dormant until the shoot has grown long enough to diminish the influence of the hormones produced by the terminal bud or until the terminal bud is pruned off–then they begin their growth. If you remove lateral buds, you’ll redirect growth to the terminal bud; the shoot will lengthen dramatically and tend to grow upward.

Latent buds lie dormant beneath the bark. If a branch breaks or is cut off just above a latent bud, the bud may develop a new shoot to replace the wood that has been removed. If you need to repair a damaged plant, look for a latent bud and cut above it.

There are four basic pruning cuts, each aimed at producing a different effect. For cuts that involve cutting above a growth bud, make your cut as shown at left above. Angle it at about 45 degrees, with the lowest point of the cut opposite the bud and even with it; the highest point about 1/4 inch above the bud. Each of the steps below can be applied to your specific pruning need.

Pinching is one of the easiest “cuts” to make without cutting: You simply pinch off a terminal bud with your thumb and forefinger. This stops the stem from elongating and encourages bushy growth. It is typically done on annual and perennial flowers and on some vegetables. Also use it to direct growth of small-leaved shrubs and give the plant an even shape.

Heading means cutting farther back on the shoot than you would for pinching. In most cases, the lateral bud has already grown a leaf, and you cut right above the leaf. Usually done with hand-held pruners, heading stimulates the buds just below the cut, encouraging dense growth.

Shearing, customarily used to create a hedge or a bush with spherical or square form, is a form of heading that makes no attempt to cut back to a bud. However, because plants chosen for this treatment typically have many lateral buds close together, you’ll usually end up cutting near a bud. Shearing stimulates many buds to produce new growth, so you’ll be repeating the job regularly after you start. Because this method cuts right through leaves, it’s best done on small-leaved plants, where damage is less noticeable. Use hand-held or electric hedge shears for this kind of pruning.

Thinning reduces the bulk of a plant with minimal regrowth: Each cut removes an entire stem or branch, either back to its point of origin on the main stem or to the point where it joins another branch. Because you remove a number of lateral buds along with the stem or branch, you’re less likely to wind up with clusters of unwanted shoots than you are when making heading cuts. (A common mistake of inexperienced gardeners is to make a heading cut when a thinning cut is needed.) Use hand-held pruners, loppers, or a pruning saw to make thinning cuts, depending on the thickness of the branch being cut.

While pruning, thoroughly check your tree for the following conditions. Contact a professional arborist to address these issues or if you’re unsure about the tree’s overall health:

Hand Shears: Use hand shears for branches up to 1⁄4 inch in diameter. Scissor-type shears make tight, close cuts on plants. Hold shears to make sure they fit your hand and feel comfortable.

Lopping Shears: For branches up to 11⁄2 inches in diameter, reach for lopping shears. Buy shears with lightweight handles for easy use. Extendable handles let you reach higher branches.

Pruning Saws: For branches more than 11⁄2 inches in diameter, use pruning saws. Coarse teeth cut on the pull stroke for easy and safe pruning.

Pole Pruners: You’ll need pole pruners for branches more than 1 inch thick and beyond arm’s reach. Pole pruners feature a pruning shear head or saw that works via rope action. Look for pruners with a handle that disassembles for easy storage.

Hedge Shears: Use hedge shears for shaping and snipping new growth on shrubs.