What Happens When a Tree Is Struck By Lightning? 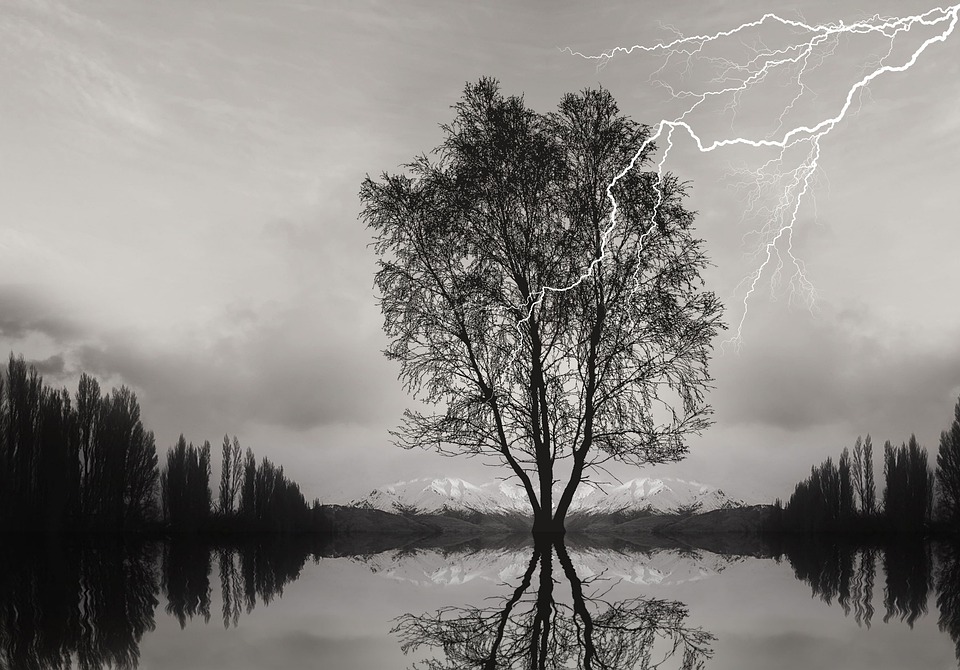 Written by Elizabeth Olsen and published on https://www.finehomesandliving.com/

A tree naturally becomes a lightning rod in times of storms, as it towers over houses and some buildings. There are approximately 100 lightning strikes per second worldwide, which means trees get hit by lightning more than you can imagine. While not all trees are vulnerable to lightning strikes, some can get severely affected.

When a tree gets struck by lightning, it can experience damage ranging from physical to internal ones. Obvious signs of damage include blowing off the bark, broken limbs, and splits in the wood. You may also notice charred areas on its trunk caused by burning from the heat of the lightning.

We’ve all seen cartoons and caricatures depicting people getting struck by lightning, with their bodies jolting around like a rag doll and their hair all spiked up. However, does the same thing happen to trees? Are trees affected by electricity in the same way as humans? Are they affected at all? These are some of the questions we’re going to answer in this article.

Lightning is one of the biggest threats to thousands of trees, which are struck and damaged by lightning every year. This is why sheltering under a tall tree during a thunderstorm is a terrible idea. Trees make effortless targets for lightning, tall wooden objects that serve as natural lightning rods during violent weather. If you have a garden or have a few trees in your backyard, chances are your trees will be one of these targets one day, so it’s better to prepare and know how to deal with the situation. In this article, we explain how trees can survive lightning strikes and what to do if your tree is ever struck in a thunderstorm.

Many trees can survive being struck by lightning, mainly if only one side of the tree receives the damage. If good maintenance and care are provided to a tree that has been hit by lightning, and if the tree’s injury is not too deep, a tree can recover and live for many more years. A tree can even be struck by lightning twice in a lifetime and still manage to survive if it’s taken care of properly. That’s because usually what puts a tree at doom after a lightning strike is the injury that exposes the tree to sickness and infection rather than the actual strike.

What To Do If A Tree Is Struck By Lightning

First, you need to be aware that an existing electrical charge can still be around the area of the blasted tree, so you should not approach a lightning-struck tree immediately after the strike. After waiting for a few minutes, the first thing to do is to supply the tree with plenty of water. This should be followed by providing the damaged tree with fertilizers to stimulate new damaged parts. The article How to Save a Tree Hit by Lightning mentions that you have to make sure to trim any broken branches or torn wood and keep an eye on the recovery progress, rather than removing the whole tree or doing extensive pruning before a year has passed. It’s just safer to wait until springtime because trees that make it until then have bigger chances of surviving the strike.

Why Trees Get Struck By Lightning

Trees are rooted to the ground, so for them to take shelter from lightning while being the tallest, most unsheltered objects are almost impossible. Plus, they contain internal moisture that attracts lightning simply because they can conduct electricity better than the air particles around them. They are also usually planted in open areas or near buildings or water bodies, which makes them more prone to be struck than any other object.

Many lightning protection systems can be installed to protect valuable or property trees by steadily releasing the electrical charge before causing any further damage to a tree. However, it’s more important to know how to save a tree after it gets struck by lightning as there is a higher chance a tree will be damaged after a strike, sometimes even while being protected by one of these systems. Make sure to watch your tree for a few months before deciding to remove it to give it time to recover and get rid of the damaged layers.